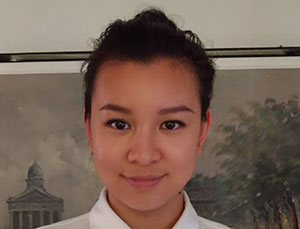 A Slovak-born Vietnamese woman, Hahn Doan grew up in a bicultural and bilingual environment that not only opened her mind and raised her curiosity from a young age, but also shaped her future.

After her high school studies in Bratislava, Slovakia—during which she added English and German to her language repertoire—Hanh decided to pursue her studies abroad and obtained her Bachelor of Science in Business Economics at Martin Luther University in Halle (Saale), Germany.

Having a firm base in business and economics and fluently speaking multiple languages, Hahn began her career at an international event management company in Bratislava as a junior sales & marketing manager, where she interacted with people from all over the world on daily basis. However, Hanh has always been very passionate about the fashion industry, which she explored in her bachelor’s thesis on fast fashion—a fascinating phenomenon that is completely disrupting the traditional fashion system.

While searching for a window to enter the world of fashion, Hahn discovered Domus Academy and the chance to win a scholarship based on a project. In 2016, Hanh was awarded with a partial scholarship and graduated with the title of Master in Fashion Management. She completed an internship that later turned into her current position as a junior digital analyst at Contactlab in Milan, a leader in customized, multichannel digital marketing solutions.

“Domus Academy is anything but a traditional institution that teaches through books and theories. This is one of the reasons why it was the best choice I could have made for myself—not only in terms of my education and future career path, but it also taught me the very valuable lesson of work ethics.”

“Domus Academy is a place that provides their students with practical experience in the form of real collaborations with brands and companies, rather than basic case studies, which made me not only understand but also experience how the fashion industry works.”

“Another valuable and (later on in my career) inevitable skill I learned at Domus Academy is how to work with people, in general—and at the same time, how to interact with and reach people from multiple nationalities and cultural and educational backgrounds as well as from different age groups. I believe that this is the key skill that truly counts once you enter the ‘real world,’ where you won’t be able to pick your three best friends to work with anymore—especially in today’s ‘real world,’ which is becoming more and more globalizedall the time. And that is what I believe made my Domus Academy experience so unique and unforgettable.”

Work with fashion brands on practical projects like helping to develop an innovative, consistent fashion collection from research to realization.

Prepare for a career in fashion management by learning about product development, brand management, merchandising, and more.

Learn how to market fashion brands through image-based storytelling and visual merchandising strategies for displays.

Strenghten your understanding of the fashion industry, by combining fashion studies with intensive studio practice.

Learn the principles of purchasing, merchandising, marketing, production and distribution while studying fashion.

Learn how to develop visual communication strategies for fashion brands.