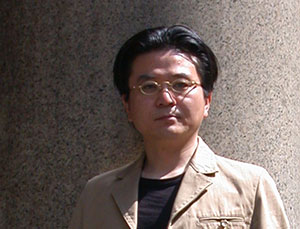 Architect and Designer Jae Kyu Lee was born in 1963 in South Korea, where he later graduated in architecture. He then moved to Milan, where he attended Domus Academy and obtained the Master in Product Design in 1996.

Architect and Designer Jae Kyu Lee was born in 1963 in South Korea, where he later graduated in architecture. He then moved to Milan, where he attended Domus Academy and obtained the Master in Product Design in 1996.

He currently lives and works in Seoul. He is a professor of Hong-Ik University Graduate school of Industrial Art. From 1997 to 2008, he was a member of the “Studio D&L” in Milan.

One of his projects “Piano Seduto” was selected for the Permanent collection Museum of Modern Art (MoMA) in New York. He returned to Seoul in 2008, established “Studio BUTTON”, a multidisciplinary studio in Seoul with projects on urban planning, architecture and design.

He has won several awards and competitions, and exhibited in major museums, design fairs and publications.

Discover the exclusive projects created by Jae Kyu Lee during his professional career.

Learn how to manage and market luxury brands by collaborating with design professionals on projects with leading fashion, product and hospitality companies.

Learn how to create meaningful value, messages and customer experiences for luxury brands.