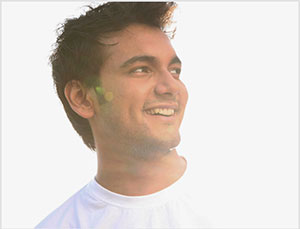 Born in Mumbai, Vir Karamchandani began his design journey with two semesters in industrial design at the Art Center College of Design in California, USA. He then worked as a brand & communication designer at VR Design, where he was responsible for the entire branding process for clients, from conception to production.

He earned his Bachelor of Design at Raffles Design International (Mumbai) in 2014. That same year, he won a bronze A’Design Award for a seating system. He then won a scholarship contest to study at Domus Academy and received his Master in Product Design in 2016.

During his master’s program, he interned as a UX designer at Fjord (Accenture), assisting on a large-scale project for a global insurance provider and creating prototypes to test concepts.

He returned to Mumbai and worked as a UX designer for Accenture Digital, where he co-created a revolutionary system that uses more than 85 parameters to unify reviews of digital experiences into a grade. This system has a patent pending and received the Accenture Celebrates Excellence award.

Vir then moved to a position as senior UX designer at ACKO, a digital-first general insurance company. There, he created a unique purchase flow in which car policies can be sold in two minutes. Today, he is a UX Designer Consultant at Deloitte Digital, a creative digital consultancy. He is working with a great team of consultants for clients based in the United States.

“A year at Domus feels like a few days. There is so much happening on each floor, it’s hard to put your finger on things. So, I didn’t. I enjoyed the ride and walked out with a new perspective on design. There is so much to soak in; we had challenging workshops and excellent mentors and classmates from all around the world. This is the perfect breeding ground for innovators who want to harness the power of design (in the bigger sense).”