Join the project-based competitions and get a Scholarship for September or November 2022 Master’s Programmes. 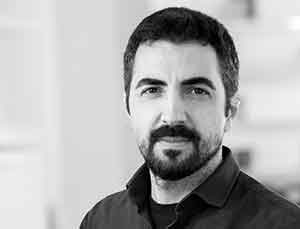 After obtaining his bachelor degree in Industrial Design in Rome, Pietro started his career in Bologna, working with Massimo Iosa Ghini for clients such as Ferrari, Boscolo Hotels, Listone Giordano.

After obtaining his bachelor degree in Industrial Design in Rome, Pietro started his career in Bologna, working with Massimo Iosa Ghini for clients such as Ferrari, Boscolo Hotels, Listone Giordano.

In 2010 Russomanno attended the Master’s in Design at Domus Academy in Milan and later worked for Haier Europe (then Candy Hoover group) as industrial designer.

In 2013 he moved to London, UK, joining Sony at their Design Centre Europe. He had the chance to work on large variety of consumer electronics project, developing products that have sold 100.000+ units each. In 2016 he was the recipient of Sony’s Special Recognition Award for the design of the Passengers (2016) movie props. In 2018 he started working as INDUSTRIAL DESIGNER and DESIGN MANAGER for Huawei, at their newly formed Milan research center, where he oversees customer experience related projects.

Discover the exclusive projects created by Pietro Russomanno during his professional career.

“Domus Academy definitely came at the right time: although I had already worked with prestigious clients on several projects, I felt the need to deepen my understanding of design with a more holistic approach, also to be able to encompass a broader spectrum of values whilst developing design projects. Skills developed during the Master have been later paramount to get to the highest levels of the consumer electronics industry and beyond.”

Read more
GET YOUR INFO KIT
Fill in the short form and receive information regarding our Postgraduate Programmes, admission procedures, campus facilities and scholarships.
AUTOFILL
Contact us
INFO KIT
Call us +52 5530210202
CALL US
Chat with us
CHAT WITH US