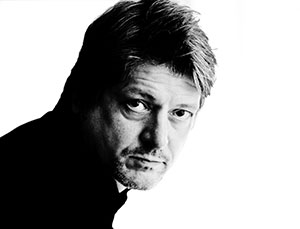 Neil Poulton (born 1963) is a Scottish product designer, based in Paris, France. He specialized in the design of deceptively simple-looking mass-produced objects and has won numerous international design awards.

Neil Poulton (born 1963) is a Scottish product designer, based in Paris, France. He specialized in the design of deceptively simple-looking mass-produced objects and has won numerous international design awards.

Poulton is best known for his designs in the fields of technology and lighting design and is often associated with manufacturers LaCie, Artemide, Megalit and Atelier Sedap. Among his recent clients, Christofle, Forestier, the Glenmorangie Company and Vertgo Bird.

In 2007 the Centre Georges Pompidou museum in Paris acquired six Poulton-designed objects for its Permanent Contemporary Collection. In 2008, Time magazine included Poulton in ‘The Design 100 – The people and ideas behind today’s most influential design’.

Neil Poulton has lived and worked in Paris since 1991. Poulton gained a BSc degree in Industrial Design (technology) at Napier University in Edinburgh in 1985 and was awarded the SIAD Chartered Society of Designers Student Product Designer Of The Year. In 1988 he gained a Master diploma in Design at the Domus Academy in Milan, Italy, under Italian architect Andrea Branzi and designer Alberto Meda. Poulton’s tutors included Italian architect Ettore Sottsass, German industrial designer Richard Sapper, Isao Hosoe and Anna Castelli Ferrieri.

Discover the exclusive projects created by Neil Poulton during his professional career.