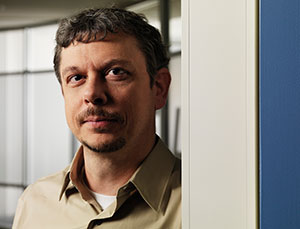 Marco Susani is a design consultant based in Chicago. In 2010, he co-founded, with Defne Koz, the studio Koz Susani Design, where he is responsible for experience design, interaction design, and strategic design.

Marco Susani is a design consultant based in Chicago. In 2010, he co-founded, with Defne Koz, the studio Koz Susani Design, where he is responsible for experience design, interaction design, and strategic design.

Marco enrolled in Domus Academy in 1984—its very first year—earning a Master in Product Design. He began his career with Ettore Sottsass, an undisputed icon of 20th-century design, first at Olivetti Design, then at Sottsass Associati, where Marco took the role of associate partner. From 2000 to 2009, as an executive in Motorola’s Global Consumer Experience Design, he led Motorola’s culture change toward a design-oriented, experience-driven company.

He has designed for companies including Philips, Panasonic, Seiko, Olivetti, 3M, NTT Japan, Zumtobel, Nissan, Mitsubishi, Tokyo Gas, Toshiba, Apple, Logitech, Unilever, Telecom Italia, Mediaset, Bticino, and Fontana Arte. His works have been shown at the Triennale di Milano, Memphis Gallery Milano, Centre Pompidou Paris, Axis Gallery Tokyo, Grand Palais Paris, and Design Museum London. He has won many prestigious awards, and his works and interviews have been featured in international magazines. He is a professor of industrial design and design innovation at the University of Illinois.

Discover the exclusive projects created by Marco Susani during his professional career.

“Domus Academy: We expected personalities—prominent ones—but we didn´t expect anything from the school. It was the first year. A ‘school-not-school,’ they told us. I don´t think I understood what they meant. We were guinea pigs in an experiment that taught us how to . . . experiment and experiment again. We learned how to be curious, how to discover new ways to do design, how to reinvent every day our own craft. Fortunately, we continued to reinvent ourselves for thirty years, and in the end maybe we understood what they meant. Thank you, prominent personalities, and thank you, school-not-school for having changed our lives.”