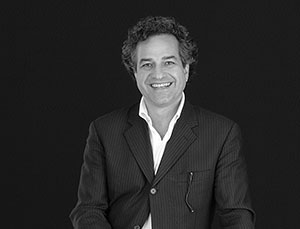 Designer and critic, Marco Romanelli was born in Trieste in 1958. He received his degree in Architecture from the University of Genoa in 1983 and his Master in Design from Domus Academy in 1984.

Designer and critic, Marco Romanelli was born in Trieste in 1958. He received his degree in Architecture from the University of Genoa in 1983 and his Master in Design from Domus Academy in 1984.

Since 1995 he has been art director at O-Luce. From 1996 to 2005 he was art director at Montina and, in 2007 at Marazzi. Upon request of Fiat Engineering, he designed the restoration of the “Museo della Civiltà Romana” in Rome-EUR.

His works were published both in Italy and abroad. In 2004 he participated in the Venice Architecture Biennial in the “Notizie dall’Interno” (Domestic news) section. Since 2006, he teaches “Jewelry design” at Politecnico di Milano.

As regards to his design activity, since 1988 he has collaborated with Marta Laudani, with whom he developed projects for prestigious Italian and international companies. In 2011, Laudani&Romanelli were awarded the Compasso d’Oro for developing a design experience with local artisans promoted by Regione Sardegna.

Discover the exclusive projects created by Marco Romanelli during his professional career.

“Domus Academy was the true starting point of my design thinking. There I met, contemporarily, the post-modernists, specially Sottsass e Branzi, back then representing a dominant culture, an a great master of the “classic Italian Design”, Mario Bellini. I chose without a doubt the last one! Learning however from the first, the need to make the projects become a tale or at least a story. To Maria Grazia Mazzocchi goes the tangible sign of my gratitude!”