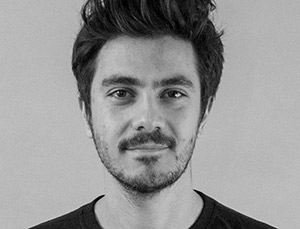 After graduating from Domus Academy, he worked as an interaction designer at RCS MediaGroup and as a user experience designer at Bitmama in Milan.

In 2015, Eray moved to New York to work as a senior service and interaction designer with Fjord, a company that focuses on Living Services—digital experiences that are responsive to the user and the environment, able to shape-shift and renew themselves to remain relevant.

In this capacity, Eray works with international corporations to envision service design strategies and design digital products. He is active in all phases of the design process and presents work to all levels. During his first two years in New York, Eray continued to serve as a visiting lecturer at Domus Academy.

“Domus Academy was my first step into the design world. I had the chance to work on interesting and challenging projects with very talented students from all over the world. It was definitely a strong first step!”

Learn to define problems and solutions in the field of interaction and user experience through innovative technologies.

Design new services and user experiences that improve the interactions between service providers and customers by developing your skills in problem-solving, storytelling, and design thinking.

Design innovative ways to communicate a company’s brand values and story to its customers through physical, digital and social media.

Deepen your skills in storytelling, prototyping, problem-solving and business design.

Learn how to create integrated graphics and engaging narrations based on customer needs.