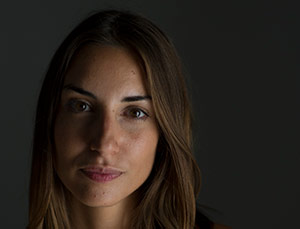 Danai Gavrili is a young designer, who co-founded Lommer, a design studio based in Athens. Lived and raised in Greece, she studied Product Design in Athens.

Danai Gavrili is a young designer, who co-founded Lommer, a design studio based in Athens. Lived and raised in Greece, she studied Product Design in Athens.

After that, Danai continued her studies with a Master’s degree in Design at Domus Academy in Milan, in which she got accepted with a scholarship.

With her return to Greece, she started working as a freelance designer, focusing on furniture, mixing interesting materials together to an industrial and modern style.

A three-month design project at the Museum of Greek Gastronomy gave her a chance to meet a colleague that soon became her partner to something new, Lommer. Since 2014, they have been working on their brand, which focuses on bags and accessories with unexpected materials.

Lommer got awarded with two international design awards: a Silver A’ Design Award in 2016 and an International Design Award (IDA17) a few years later. This made the brand globally recognizable and allowed them to do collaborations around the world.

Discover the exclusive projects created by Danai Gavrili during her professional career.

“My experience at Domus Academy was something unique. It was a dream coming true and I couldn’t be happier when I got the news about being accepted with a scholarship. Domus’s work is always an inspiration and reference for me and my work. This is the place where I understood the limitless world of design, where I loved design even more and I couldn’t wait to experiment with more and more different and unique materials. I got to test my limits, push further and always creating something different. That life’s philosophy I got from Domus Academy still follows my every creative moment!”